In the South Seas there is a Cargo Cult of people. During the war they saw airplanes land with lots of good materials, and they want the same thing to happen now. So they’ve arranged to make things like runways, to put fires along the sides of the runways, to make a wooden hut for a man to sit in, with two wooden pieces on his head like headphones and bars of bamboo sticking out like antennas—he’s the controller—and they wait for the airplanes to land. They’re doing everything right. The form is perfect. It looks exactly the way it looked before. But it doesn’t work. No airplanes land. So I call these things Cargo Cult Science, because they follow all the apparent precepts and forms of scientific investigation, but they’re missing something essential, because the planes don’t land.

Imagine some primordial religion where they would explain lightning as the consequence of thunder god being mad and throwing bolts of lightning. This is an attempt to explain natural phenomena.

Or imagine occult or magical practices, for example, when some tribes do a dance to make it rain. This is an attempt to influence things (but without understanding the nature of it).

It is some kind of a long tradition of humankind to do such things. Some of those attempts were more successful than others - that way science appeared. Science is a successful way to explain things and consequently to be able to predict things or make it work in some useful way.

Unsuccessful attempts, for example, are pseudoscience, mysticism, alchemy, etc. Note: not all fields of human knowledge can be covered by science, for example, there is philosophy and art.

Programmers are people as well - they try to understand the nature of computation and computers, they try to reason about computers and software, they try to make computers do what they want. And we do the same thing as people did before - we have some set of beliefs about the subject - some beliefs have a reasonable explanation to it and some don’t.

cult - a system of religious beliefs and ritual

JavaScript has two non-values: undefined and null. Non-values suppose to represent the absence of the value. We have two distinct non-values, so there suppose to be a reason for their existence, right?

So people try to explain it: 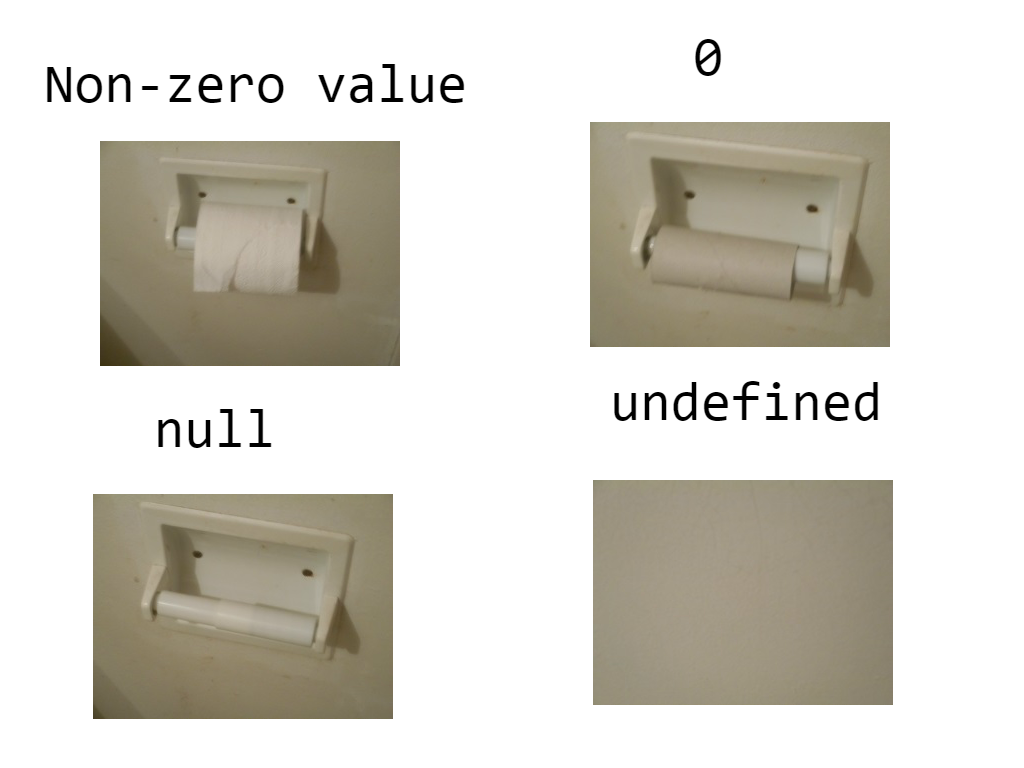 4.4.13 undefined value - primitive value used when a variable has not been assigned a value

4.4.15 null value - primitive value that represents the intentional absence of any object value

This may trick you to think that typeof is the reason why null is for objects. But turns out there was a bug in the initial implementation of JavaScript, which persisted till those days. See The history of “typeof null”.

and null - the only places, that I found, that returns null are:

(Deprecated) The function.caller property returns the function that invoked the specified function. It returns null for strict, async function and generator function callers.

The Object.setPrototypeOf() method sets the prototype (i.e., the internal [[Prototype]] property) of a specified object to another object or null.

And some DOM functions, but DOM is not a part of JS specification, it is more like a library.

JS itself doesn’t use null that much. It is used in deprecated functions or rarely used functions.

null is used in JSON, but it was introduced as a library and later was included in the language. And the author of the JSON (Douglas Crockford) believes that null should be deprecated.

A lot of languages has one non-value:

Even more, the author of null - C.A.R. Hoare says that null was The Billion Dollar Mistake. In Haskell, for example, instead of null they use Maybe (disjoint union approach):

There is no real reason to have two non-values. It was a programming language design error (it is ok to make errors). But because they exist, people try to explain their existence with something more than legacy code.